Douglas Wilson has reached a new height with the release of a video song, “Hold Your Peace.” A new height of chutzpah, that is.

A couple things should be mentioned before delving in to the dirty deed itself. First, the band’s name “Jenny Geddes” is not unproblematic. It may be that some Scots take pride in Jenny’s insolence, but some Englishmen might wonder in return, “why can’t you people keep your women in line?” Said differently, if Jenny’s issue was a legitimate one, where were all the great and renowned Scottish warriors? Just as, the greater you make Joan of Arc, the lower the Frenchman becomes. If we don’t want our girls at the front line of combat, do we want them bopping ministers over the head with stools?

Second, note that the iTunes credit as well as the inset to the video now identifies the band’s full name as “Douglas Wilson and the Jenny Geddes Band.” This man won’t do anything unless his name is on the marquee. That he accepted that designation for this band of buddies tells you everything you need to know about Douglas Wilson.

The song is an in-your-face celebration of a particular understanding of God’s sovereignty. It picks up on the metaphor of the potter, who can do with his pots as he chooses.

Hath not the potter power over the clay, of the same lump to make one vessel unto honour, and another unto dishonor? Rom 9:21

To exemplify this sovereignty, the guys take turns pitching patio flower-pots to a fellow, who whacks each one into smithereens with a baseball bat.

1. But note that an important theme of Rom. 9 is the fittedness of the destiny of each pot to its nature. In contrast, these nice clay pots are eminently suitable to protectively surround a plant, and grace a patio or porch with the same. Moreover, they have literal value. The guys shelled out a not inconsiderable sum at Home Depot to acquire these pots (I’m especially jealous of the 12 incher), then wantonly destroyed them, like vandals.

2. God’s justice is not wanton.

3. God does not deal with his creatures like a vandal. 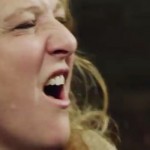 There is a smug gloating throughout this video. Even the little old ladies are roped in to a Wilson sneer. But this is not the Apostle Paul’s attitude. His tone is gratitude for mercy shown, coupled with a deep reflection on his lost countrymen, for whose redemption he would be willing himself to go to hell (Rom. 9:3).

Even such a small detail as the mindless thump thump thump of a baseball bat on a 55-gal drum at 0:33-36 is telling. To me, it reminisces of the boot stomping the human face in Orwell. Ceaseless percussion is either murderous or sexual. This was not lost on the original rockers who embraced it. (It is not heard in serious music. “Douglas Wilson and the Jenny Geddes Band” are not serious men, though they certainly look somber. But this is the somberness of a proleptic unmourned funeral, not the solemn joyfulness of a man simul justus et peccator.) 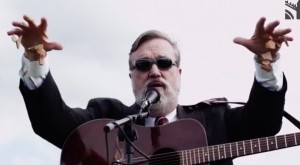 Someone in the crowd of groupies can be counted on to blurt out, “didn’t you see the time reversal? that’s redemption!” No it isn’t. If these are vessels fit for destruction, time-reversal merely restores their fittedness for destruction.

2 thoughts on “Review of “Hold Your Peace” by Douglas Wilson”