Yesterday, at the big state “evangelical” church in the center of old Wittenberg, the worship program explained 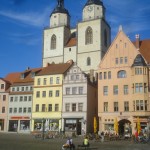 The flip side of the bulletin backfills a bit more detail, in English:

At the time of distribution, you are invited to come forward and form a semi-circle in the chancel area.… In our church children are invited to receive communion if that is the will of the parents

There you have it. In the “invitation” to partake in communion, there is no mention of the need for

Like most American churches, they have become a self-invented church, with no thread of continuity to the holy catholic church, and with less backbone than the anabaptists had when they re-invented the church. 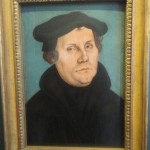 When in 1817 the Prussian King Friedrich Wilhelm III  fused the Reformed and Lutheran churches into one single “evangelical” state church, the “old Lutherans” separated as the continuing true Lutheran church. The SELK (Selbständige Evangelisch-Lutheranische Kirche)  is the modern remnant of this separation in Germany. The ones that emigrated to the US formed the Lutheran Church, Missouri Synod. These two groups have a kind of sister-church relationship.

The SELK is making a move on Wittenberg, the Lutheran Mecca, and because of funding undergirded by their American cousins, can afford to do it, and this is attracting some attention and pushback from the state church and media.

In the background is the funding issue — “what? we thought we had a lock on that!” Enough money can be collected from Missouri Synod donors to rival the tax-collected revenues of the state church, at least for focussed projects; whereas the SELK by itself is only slightly larger than my church, the OPC, and can barely feed its own pastors. However, in a close reading of the counter-attack by the statist church, a slightly hurt “we’re Lutherans too” can be detected. “This just makes it look to the world like we are divided.”

Ah, unity. Let’s hide the fact that some of us no longer believe, so the world will not be put off by our lack of unity. Which begs for the question, “if you don’t believe, why do you care what the world thinks?”

But the SELK for its part, whether from strategy or confusion, sets forth as if the whole problem were Lutheran distinctives being watered down by Reformed ones: rather than seeing denial of the gospel as the problem.

Of course, fundamentally they know it has to do with the gospel: they just think the loss of the gospel must be caused by the fusion, rather than modernism. It is exactly like the Protestant Reformed church blaming the apostacy of the CRC on the embrace, a century ago, of common grace and the free offer. From the standpoint of empirical history, all this is understandable. One of the dangers of separation, even when justified, is that subsequent history tends to be interpreted from the standpoint of the what was at stake at the exact moment of separation.

So we can learn from our brothers. It is a shame that things always drift into such dead-end non-issues, when the real issue is the gospel, and indeed, the reception of the word of God as such. The abandonment of that is what causes such grief of soul to the true Christians in Germany.

Having made that point, however, we can also turn it right back around to the concrete. The SELK emphasizes the Lutheran doctrine of Communion as the point that distinguishes them from the fusion church, and it turns out that the administration of the Lord’s Supper at the state church was indeed just the point at which the four problems I outlined above jumped out. Expanding on them in sequence,

1. There is a failure to see a decisive turning from one’s wicked ways in conversion as signified by baptism.

2. One can see the need to come to the Lord’s Supper in faith, that it be a blessing and not a curse.

3. Like our own paedo-communionists, they have given up on confirmation controlled by the church, and transferred control to the parents. Some parents will allow, others not, thus creating two classes amongst the young people through no fault of their own. Moreover, if it is so important to allow children to come, why is it acceptable to allow any parents to decline. All of this feeds directly into the fourth point,

4. in any case, there is no longer a doctrine of the church as controller of the sacraments.

In short, 1 and 2 can broadly be seen as a denial of the Word, and 3 and 4 a denial of church and sacrament, so we see precisely that both of Luther’s marks of the church are threatened. By focussing their attack on communion, the SELK perhaps has found the loose thread which, pulled upon, will unravel the few remaining rags covering the nakedness of the state church [1]. This despite the fact that at first blush, it seemed like they were barking up the wrong tree.

Perhaps the lesson here is simply that a Confessional church should use its Confession. There is a coherence which allows error that all Christians recognize as such to be rooted out, even using points of a Confession that are controverted between communions.

For us Old-Lutherans or Confessional Lutherans, the most important thing about partaking of the holy Supper — a confessional act of the church —, is not in the first place a common meal of Christians, but rather the giving of the holy body and holy blood unto the forgiveness of sins.