The problem of girl-sports crystalized for me five years ago while watching the NBA playoffs, thanks to their own propaganda. During the commercials, the “W”NBA weighed in. “Basketball is basketball” was the meme.

“Yeah, but… y’all can’t play basketball,” I thought to myself.

On the face of it, a pretty ridiculous meme. As if, whether watching junior highers or professionals, it is just “basketball” in any case.

Let’s call the bluff on the WNBA. Any Div. II college boys’ team could cream the best women’s professional team. Nay: any state in the union could assemble a team of high school boys that, after a couple weeks practice, could cream any WNBA team. And no real woman would find that fact insulting in the slightest.

It makes no more sense to have a women’s basketball league than it would to have a league for men shorter than five foot ten. Less sense in fact. A height-segregated league actually would make some sense, by analogy to the weight-segregation in boxing. But this is different, since the underlying significance of the segregation criterion is officially denied at the same moment it is utilized. You’re supposed to just take the fact that there are separate male and female leagues as a fact of nature, not to be thought about or questioned, any more than having separate bathrooms would be.

But the whole business of female sports is based on a simple lie. There is no rule against a girl joining an NCAA basketball team, an NBA team, or a fifa world class soccer team. The media call these teams the “men’s teams” in distinction from the “women’s teams,” but this is simply a lie. An arrant lie. Women are allowed to try out for the real teams, incorrectly called “men’s” by the press, TV, and wikipedia. But men are not allowed to try out for the women’s teams.

Women even have their own chess leagues — a “sport” where presumably upper body strength plays no role.

Feminists celebrate the triumph of women’s this, women’s that, but reality impinges. All these exclusive leagues prove women’s inferiority — at the things men excel at. You can’t fool all the people all the time. The WNBA is the proof that feminism is doomed, and the “women’s world cup” is further proof. It is just waiting for the little boy to shout out that the emperor is naked; or, for some judges to be shot; whichever comes first. No one except a few sophomore sociology majors believe the propaganda: it is too obvious.

It is unhealthy for society to root for women’s sports, because it is worse than amazonian. The image of men cheering the women who trot out to do battle for our side is an exact inversion of the primal. Woman as warrior going forth to battle. Since it is women vs. women, what are they “defending” symbolically? their men and children. So the primal imagery is exactly reversed. The men become doubly worthless — cheering their womenfolk into battle (which implies it is a good thing, and eggs them on even more) while their own ever-widening arse is firmly planted in a chair.

The tissue of lies is even thicker than that. Here’s the real irony. Just because girls are out playing soccer, slapping each others’ butts, and whooping it up does not mean la différence has actually been broken down. The manner of appropriation of sport is still fundamentally different.

This observation led to my proof that females do not regard sports the same way as males and never will. Let it be that girls are now populating soccer leagues, softball, basketball, whatever, in the same numbers as boys. Nevertheless, here is my claim: you will never, ever, in a million years find a bunch of girls that have rustled up a soccer game amongst themselves, with no adult prodding, in a sandlot completely hidden from the gaze of the world.

Whereas just that is the glory of the boy. 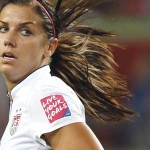 I think if girls were not encouraged in a completely artificial way to participate, there would be no organized girl sports to speak of. The number one artificial stimulant is undoubtedly the deluded fathers. She’s doing it for daddy. Second, there is all the hoopla, the coaches, and the fans, all which fans a girl’s natural temptation to narcissism. It is more than just narcissism, however. It is also the feminine self-sacrifice for the collective. Let her think, “we really need you to win this one for us,” and she will sacrificially go out and try to do just that. That is the tragedy of all those pent-up, earnest faces. Chesterton made a similar point about working women.

I would observe here in parenthesis that much of the recent official trouble about women has arisen from the fact that they transfer to things of doubt and reason that sacred stubbornness only proper to the primary things which a woman was set to guard. One’s own children, one’s own altar, ought to be a matter of principle—or if you like, a matter of prejudice. On the other hand, who wrote Junius’s Letters ought not to be a principle or a prejudice, it ought to be a matter of free and almost indifferent inquiry. But take an energetic modern girl secretary to a league to show that George III wrote Junius, and in three months she will believe it, too, out of mere loyalty to her employers. Modern women defend their office with all the fierceness of domesticity. They fight for desk and typewriter as for hearth and home, and develop a sort of wolfish wifehood on behalf of the invisible head of the firm. That is why they do office work so well; and that is why they ought not to do it.  (G. K. Chesterton, What’s Wrong with the World, part 3, sect. iii.)