Turning now to the constitution of the mother assembly, Christ McKirk of Moscow, I can be more brief than before. There are two points to make.

The McKirk has adopted (among others) both the WCF and the 39 Articles. Now, the 39 articles say,

And the other Books (as Hierome saith) the Church doth read for example of life and instruction of manners; but yet doth it not apply them to establish any doctrine; such are these following:

The Westminster Confession in contrast states

The books commonly called Apocrypha, not being of divine inspiration, are no part of the canon of the Scripture, and therefore are of no authority in the Church of God, nor to be any otherwise approved, or made use of, than other human writings (I.3).

So the one says that Bel and the Dragon is properly read by the Church for example of life and instruction of manners; while the other says it is not to be otherwise approved, or made use of, than other human writings. That is, it might not be used or approved at all, depending on content. My purpose here is not to adjudicate between the great Anglican and Presbyterian creeds. The point is just the logical one of a single body stapling together inconsistent standards as their “book of confessions.” This is not a move toward catholicity; it is a move toward confusion.

It is in fact a contradiction, and formally, one can therefore rigorously prove any proposition whatsoever from the McKirk constitution. For example,

Probably no body would blunder into such a syllogism in such bald form — though it would do so with logical rigor. But the point is made. A contradiction leads to asserting anything whatsoever with validity.

Another logical point has already been made in respect to inter-McChurch confessionalism before. There, it was shown to be impossible to adjudicate disputes between McChurches when different confessions are allowed. Here, we see that even within a single McChurch, “holding to” contradictory confessions literally means holding to anything whatsoever — or equivalently, holding to nothing whatsoever.

2. Unanimity required for discipline of officers

If an elder believes himself to be qualified to continue in office, but two or three believers hold that he is disqualified, these two or three witnesses should request a special session of the elder board where they would be allowed to present their case (1 Tim. 5:19). If the elders unanimously decide that the case has merit, that elder, depending on the gravity of the charges and his response to the correction, will be rebuked in the presence of the heads of households (1 Tim. 5:20), or will be removed from the office of elder (1 Tim. 3:1-7; Tit. 1:5-9), or both.

The language itself is sneaky. They “would be allowed to present” — if the “special session of the elder board” ever took place. It doesn’t say the request must be granted. And what does it mean, “the case has merit”? Prima facie plausibility, such that a trial should take place? Or a guilty finding, after such process? Plenty of wiggle room is left open for all such questions. For it is the rule of men, not law.

But all of that is quibbling so far as practical reality is concerned. Whatever kind of “merit” is involved (and probably no one knows until it would happen), it is dead on arrival unless the McElders are unanimous in their verdict!

Actually, it does not even specify that the McElder under accusation must recuse himself — though let us charitably assume the chutzpah would not go that far.

Even if the point weren’t to deceive anyhow, demanding unanimity from any body of electors bigger than three or four is insane — even when one has complete control of the admission process. I observed a (real) Presbytery for many years that could not even achieve unanimity on when the annual picnic should be held. 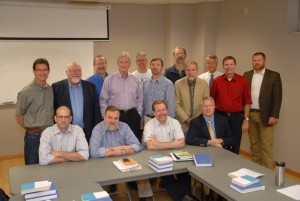 Nancy, I’d say I’m pretty safe to ride this one out.

The McElders have to be unanimous to call a McPastor to begin with. But of course, Wilson got in when the dissenting elders had been driven away and a  flock of groupies put in their place. That is how it began — no doubt virtually unanimous, since the animae that couldn’t take it any more had already fled.

Flash forward twenty years.The group has built up to a substantial body, all carefully screened for loyalty no doubt. But to stay in power, it only needs for just one single one of this shining assembly to remain loyal in thick and thin. Just one. Even if we ignore the ones beholden by blood or money, what is the chance that not even one of the eight or ten others would come through and win one for the gipper? But of course the blood and money will remain fast, so it is a moot point anyhow.

God help the “two or three witnesses” that dare bring a charge, however. Bloody footprints may be descried in the snow.

Cunning was this man in spinning his web of documents.

One thought on “Constitution of Wilson McKirk”