In the later twelfth century, Leipzig was founded.

In 1409 the University was established.

By 1423, the city had enough financial clout to begin purchasing jurisdictional privileges within the Empire.

By the end of the fifteenth century, Emperor Maximillian granted the charter to hold fairs, as the city continued to grow through commerce.

In the early 1700s, the Swedes defeated the Saxon forces in the Great Northern War; Leipzig was assessed reparations in 1706-7. Fortunately, the matter was settled and Leipzig recovered, after suffering serious financial setback.

The commercial power of Leipzig was such that Carsten was able to say “among all the territorial towns of the Germany only one could claim to be a city of real importance before the nineteenth century, and that was Leipzig” (p. 424).

Johann Sebastian Bach was there from 1723 until his death in 1750. It may be both interesting and instructive to discuss his tenure in a bit more detail. 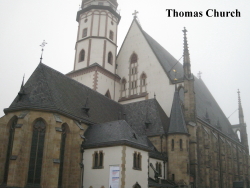 Bach’s salary was composed of many small streams of income. He had to teach Latin and Latin catechism– though he was able to hire young men to do the Latin grammar, paying them out of his own stipend. The fees from weddings and funerals were a non-trivial part of the annual remuneration, to the point that Bach privately complained to friends when a healthy year meant fewer funerals. To make matters worse, sometimes the authorities seemed to renege on their agreement, at least according to Bach’s understanding thereof: three times he actually brought complaint to Augustus the Strong, Elector of Saxony, who was busy building Dresden into an art city. It is painful to see the trials Bach had to go through to make a decent living. Church musicians today can identify with this. Some things never change. 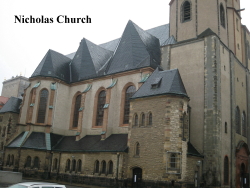 He was responsible for services in both Thomas and Nicholas, as well as St. Peters, New Church, and St. Paul. He preferred the choir layout at Thomas, but the organ of Nicholas. Since most church music of liturgical importance involves voices, this tipped the balance toward Thomas, which has since then laid claim to the memory of their famous cantor. But Bach was involved in the music of all those churches. 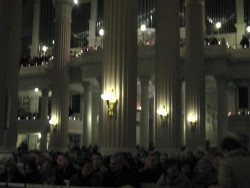 At Nicholas church, I went to what looked like a Mozart concert, based on the billing. In a way it was, and beautifully done– but it was fully integrated into a mass. (I sat in the front of the church, looking backward. The musicians are those points of light across the rear balcony.) It appears as though the Nicholas church is now popish. This is a shame, given the once Lutheran stronghold that Leipzig was. The German valley-girls next to me had to be shushed a couple times; they were clearly more interested in exchanging girl-talk than watching the spectacle at the altar. However, when it came time to receive the holy wafer, they snapped into action, as rapt in attention as the ducks at the Peabody Hotel in Memphis about to begin their march. 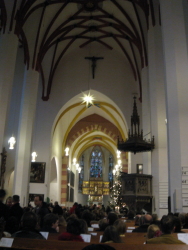 Both churches were beautiful, especially inside. Too beautiful in fact. The gospel is hanging on by the slenderest thread, if it is present at all.

(This is the inside of Thomas church — >)

For one service at Thomas, it was standing room only. Later, I estimated that the church has seating for 1600. Then there was a pause, followed by communion service. The communicants proceeded to the choir– there were probably no more than 30 or 40 that stayed.

Dabney noticed the same thing in Spurgeon’s London church in the 19th century– though possibly, for different reasons. There, it may be that Spurgeon set the fence too high; here, I have the impression it was more, “who gives a $&^%”. But I digress. 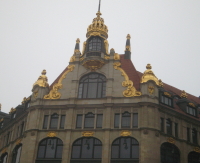 Bach had an almost uncountable number of bosses. The city council actually hired him, and took umbrage when the ministers tried to preside over his installation. Here we see Erastianism in full play. The “civil magistrate” was intimately engaged in ecclesiastical affairs. Both Burgermeister and Pfarrer were spiritually concerned, and operated on the premise of Christianity. But the Lutheran inability to separate the spheres in accordance with a scriptural regulative principle is seen in microcosm in Bach’s travails. 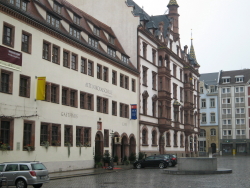 I don’t want to imply that there are easy answers on the church/state question. We can test our thinking to make sure we aren’t merely parochial by studying the history of other reformation lands.

Nevertheless, in a very small, yet significant way, we can see the beauty of the Reformed regulative principle as it applies to the constitution of the church, and the need to hedge in the civil magistrate.

Today, at least during the holiday season when I was there, mainstream church life in Leipzig is dominated by choirs, organs, children’s plays, and pageantry. There are a few signs of life. The liturgy is still trinitarian. I will have more to say about all this. For now, it is just food for thought: could the Erastianism of the Lutheran state church have led to the formalism that continues so strongly with or without the gospel?
Culture 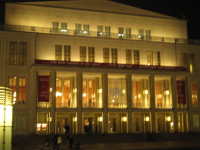 I found the opera house cold and uninviting. Even the exterior. But the interior is unacceptable. You walk in to a transept hallway containing the ticket booth at one end and a cafe at the other. Crossing that and entering the main doors, you enter a coatroom. The main loge of the opera hall is actually up a flight of stairs. This arrangement simply destroyed the atmosphere.

Architecture must take into consideration human feelings. Pure functionality mingled with mere bombast is what robots and communists end up building. 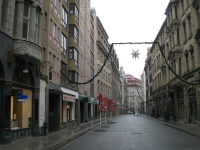 Some of the streets have retained a bit of old-world charm. The same can be said for the historical buildings such as the Rathaus. There are stamps of modernity such as exposed flying water pipes through the main square, that I hope are merely temporary; I was unable to ascertain this.

The girls seem quite diligent and pretty. I hope to meet more of them.

The whole old-town can be canvassed in 10 or 15 minutes of a brisk walk. It is almost amazing how near to each other the Thomas and Nicholai churches are.

But that is how a post-millenial city will look! 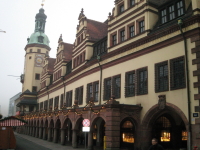 Somewhere I saw that Leipzig was designated the least expensive city in Europe; [What kind of city? of all decent cities? cities of a certain size? cities having an opera? this is why those kind of surveys are of doubtful use. Nevertheless,] indeed lodging and food were extremely reasonable– though as always, don’t get burned ordering coffee by the cup. When you get the bill, you’d think you had been guzzling whiskey. Order a “KÃ¤nnchen” (pot) and then let it go.

The weeks leading up to Christmas (I was a few days too late) are supposed to be wonderful for shopping for genuine German craftsman items– wood carvings, and so forth. Keep this in mind when planning your trip– I may not be able to wait that long for my next visit. 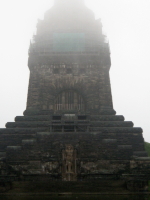 A couple miles out of the old city is a huge monument to the battle of Leipzig in 1813. This marked the defeat of Napolean, and is to Germans what Waterloo is for the Anglo-Saxon. The monument is ugly but looks promising on a day that is clear and when the museum is open– neither of which were the case when I arrived. Those that enjoy tromping around battlefields– bookmark Leipzig as one important stop on your tour.

The Battle of Leipzig in 1813 marked the end of French domination and the beginning of the rise of Germany. Coincidentally, but with providential symbolism, that same year in Leipzig was born Richard Wagner.