The British were willing to negotiate with Napoleon, and in August 1806 made generous concessions, only asking for unmolested control of Hannover; Talleyrand favored the agreement, but Napoleon nixed it.

Why? Perhaps he had a feeling the English would use Hannover as a staging point from which to undercut and negate his gains in Germany? Or perhaps it was mere megalomania?

Meanwhile, the Russians had also proposed a treaty, but this also failed, vetoed this time by the Czar.

In parallel with all this, the German states along the Rhine, under the leadership of Baden, had entered into a consortium agreement with Napoleon; the association was allegedly to further their own interests through negotiation, but the promise of men and money to France showed that it was cow-towing to Napoleon’s power, and trying to ingratiate itself to the Empire at the expense of the rest of Germany. Prussia was understandably upset, and began to rattle its sabers. Napoleon reacted with as much force as he could spare.

Having arrived in the general vacinity, Napoleon did not actually know where the Germans were. After a bit of groping around, he arrived with the main force at Jena (see link for a map), sending corps commanders Davout and Bernadotte (as shown by the heavy right-most red arrow) to Naumburg to cut off a potential Prussian retreat. 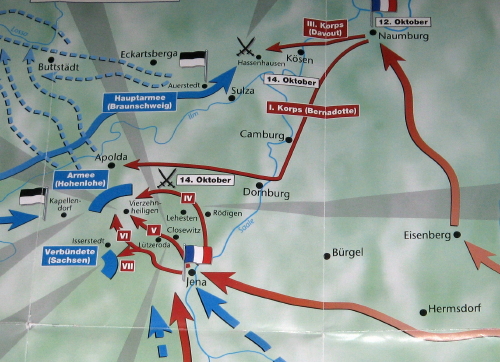 Refer to the map to visualize the developments. 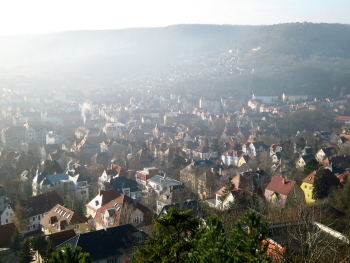 At the north end of Jena, the landscape rises sharply to a wooded region known as the Landgrafenberg.

[Here is a view of Jena from the Landgrafenberg. It was foggy on the day Napoleon arrived as well.]

Napoleon personally came here, and set his troops to work clearing a road up to the top of the hill, so that artillery could be moved up.

Discovering what he thought was the main Prussian army, Napoleon issued orders for Davout and Bernadotte to move back toward Jena and gave the order to the corps that were already in place to attack at 6 the next morning.

The attack began as ordered near Vierzehnheiligen.

[The church at Vierzehnheiligen has a prominent memorial to the slain of the battle, shown here. As always, one is impressed that a village that is no more than a pin-prick on the map turns out to have dense clusters of buildings and substantial, brick and stone churches.] 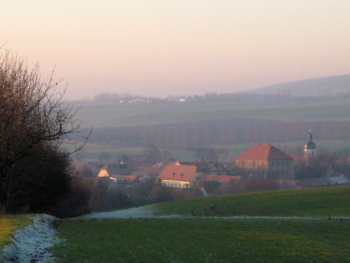 Meanwhile, up north, Davout discovered another Prussian force that turned out, when the dust settled, to have been the main force.

[I think this is Reisdorf, a sleepy little village a bit south of Eckartsberga near the Auerstedt battlefield. — >]

Bernadotte was already moving south and ignored Davout’s message requesting aid, not wanting to disobey the Emperor’s orders, and apparently at enmity with Davout anyhow and in no mood to help. (Napoleon later considered court marshalling Bernadotte, both for abandoning the target of opportunity, and for his dilatory sluggishness in following the order. But, politics prevented this being carried out.) 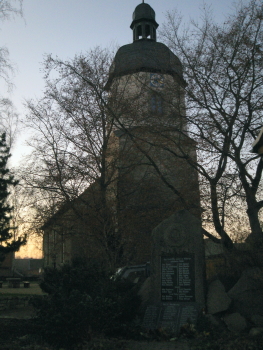 Davout was outnumbered but pressed westward. He had some luck– the Duke of Brunswick was fatally wounded by a shot; the King of Prussia dithered and couldn’t assign new commanders. Other mistakes were made by the Prussians. In general, however, one can say that the Prussian bad luck was correlated with their lack of nerve and boldness, while the opposite was the case for Davout. The latter closed in with excellent maneuvers of the forces that he did have and converged with the crushing blow near Auerstedt.

Napoleon recognized the great feat the Davout had achieved, but as time went by, tended to downplay it in favor of his own brilliance at the Jena theatre.

In any case, it was a two-arm wipeout that meant the final end of the Holy Roman Empire. 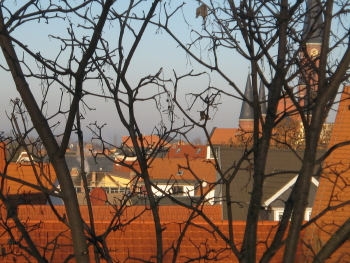 Bernadotte finally joined the Jena battle group at Apolda, and with his fresh troops led the chase of the scattering Prussians northward.

[Here is a shot of some rooftops in Apolda; the pointy red rooftops and angles are typical of German towns.]

The ensuing weeks were merely a mopping-up exercise. The King of Prussia fled all the way to Königsberg in East Prussia. Napoleon rode into Berlin, taking Stettin and Frankfurt/Oder as well– in short, the entire Prussian force was decimated.

It is near the university that the landscape rises sharply to the wooded Landgrafen area. See map. There is a restaurant with a view and lots of hiking trails. This should be considered a must-stop when touring Germany. 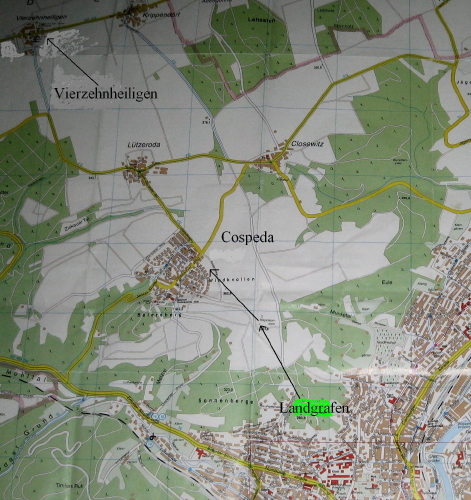 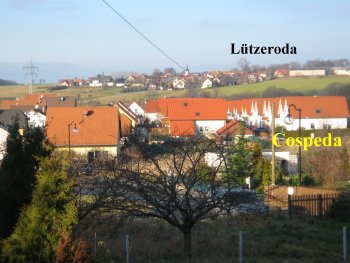 A bit north the village of Cospeda is easily visible, and as the eye sweeps to the right, separated by empty fields, is the next village of Lützeroda. This kind of landscape dotted with sharply-defined villages is very different from what we observe in America, where dwellings thin out gradually, and the separation between towns and villages is often rather vague.

In Cospeda (which I walked to with another 15 or 20 minute hike, and got a cup of coffee at the Gasthaus) is a museum where information on the battle and tour guides, etc. may be obtained. It was closed when I was there.

One thought on “Jena the Battlefield”