In the east-end district of Berlin called Treptow, the Soviet masters constructed a park to their own glory: the Sowjetisches Ehrenmal. 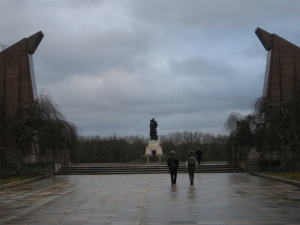 You park and approach a tall statue from far away. First, you pass between two crooked columns. According to tour books, these are alleged to be constructed partly from materials from Hitler’s chancellery.

On one of them is inscribed, “Eternal glory to the fighters of the soviet army, who offered their lives in the battle for the liberation of humanity from fascist slavery.”

First, notice what is alleged to have been liberated: not some people, but “humanity” (Menschheit). For communists, everything is an abstraction, even people.

Next, notice the phrase, “who offered their lives.” As if the Soviet soldiers had a choice!

The Soviet soldier knew that if he retreated, he would be executed by Stalin’s minions. If he surrendered, he would be captured by hostile Germans. His choice was therefore either fight, be executed, or be taken prisoner. So, he fought.

That is not heroism.

That is not “fighting for the liberation of humanity.”

That is fighting because it is the only chance for saving your sorry skin.

You pass through and amble toward the towering figure. Flanking both sides of the boulevard are faux-mausoleums, each with a slogan about freedom and heroism written by (no, guess: Goethe? Schiller? Patrick Henry? Solzhenitsyn? even Tolstoy? no; but rather)… Joseph Stalin!

And they no doubt meant you to keep a straight and solemn face!

Slogans about freedom and heroism from the man who orchestrated the planned starvation of a million Ukrainians; who invented the show-trial; who designed and implemented what Solzhenitsyn called the human “sewage disposal system,” (Gulag Archipelago, Part 1, chap. 2); whose agents were murdering, spying, and scheming on every continent on earth; who turned whole nations into concentration camps, and flushed others down the toilet.

The reality of the Soviet-German conflict in WW2 was that several nations linked arms with the Germans in their eastward march to help put the Bolsheviks out of everyone’s misery. It is not an exaggeration to say that the Germans were greeted as freedom-fighters in many places.

Europe and Asia were held in terror of the Boshevik virus. The Germans saw this and wanted to stamp it out.

Of course you didn’t read that in your government text book. We were “allies” with the Soviets after all. And we “won” that “righteous” war. 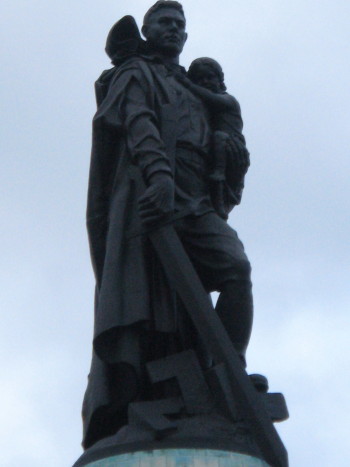 Try to forget that that “victory” ushered in the ensuing fifty year cold war with our erstwhile “ally.” Not to mention, brought about the enslavement of East Europe and the needless deaths of tens of millions of Europeans.

Finally you approach the figure. It is a 38 foot high Soviet soldier crushing the swastika, and rescuing a German child.

Again, you are supposed to maintain a straight, even a solemn face!

After the Battle of Berlin, Stalin declared open season on the citizenry. Rampant looting took place. More than 100,000 Berlin women were freely raped, and a million and a half more in East Germany.

To paraphrase Tevye, “May the Lord bless and keep the liberator… far away from us!”

Just outside the park one of the guard towers is still standing. The Soviet liberators turned East Berlin and East Germany into one massive concentration camp. Armed guards watched the border at every point.

Well, they said they were liberators!

I don’t know if the Ehrenmal is left as a tribute to sarcasm, or if it is meant seriously. If the latter, its eventual destruction will mark the beginning of a new era of freedom for East Germans, even as the destruction of the odious Lincoln Memorial will in our occupied land.

One thought on “Berlin’s Park to Honor the Soviets”