The return from Lutheran bare orthodoxy to inward change, known as Pietism, was begun by Jakob Spener, though anticipated in the earlier writings of Johann Arndt. It grew wings, however, as a result of the life of August Hermann Francke (1663-1727), and transformed the city of Halle in remarkable ways. This is a brief rehearsal of this amazing story.

Francke graduated from the University of Leipzig, and started teaching Greek and Hebrew. His true conversion to Christ appears to have occurred a little later, during a sojourn in Lüneburg that involved agonizing soul-searching. This led to an extended visit with Spener, who was at this time court preacher in Dresden. Returning to Leipzig, in 1689 he resumed the meetings that we would call “small group Bible studies” and also began to lecture on NT exegesis, emphasizing practical application. Revival broke out, and, as is usually the case in church history, this aroused the opposition of the local authorities. (In fairness, we should point out that the movement led to “enthusiasm” including claims by women, just as happened in the Great Awakening of America.) Francke was kicked out of Leipzig, landing at Erfurt. There too, there was great response to his preaching, leading, after just fifteen months, to another ban of exile at about the same time that the Orthodox party was booting Spener out of Dresden. Spener was picked up by the Reformed King of Prussia, Friedrich I, and through that influence, Francke was appointed to the faculty of the University at Halle; initially there was no salary attached to the teaching position, so Francke also assumed the pastorate of the church in the suburb Glaucha.

Halle, on the Saale River, is not too far (25 miles northwest) from Leipzig, and today shares an airport. But at that time, Leipzig was in Saxony while Halle was in a region that had come under the control of the Elector of Brandenburg.

Halle was in bad shape. The salt works had been destroyed during the 30 Years War, leading to chronic unemployment. Then, an outbreak of the Plague 1681-83 reduced the population from 13,000 to 6,000. The demoralized atmosphere had led to Glaucha evolving into a “sin resort”: 37 of 200 dwellings were taverns. 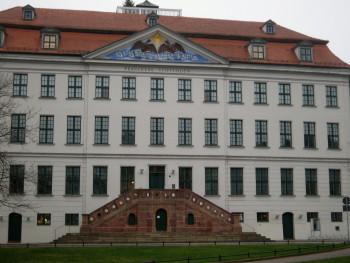 Francke set to work. Though in general disapproving of the Confessional inherited from Catholicism, Francke saw a practical use for it in view of the debauched state of the town; he started exercising church discipline. This created a firestorm reaction, but he held tough, and lives started to change. At the same time, he was concerned by the plight of all the street gamins (love children?), and in 1694 founded a poor school. The next year, full-fledged orphanages were started. In 1698 certain privileges were granted to the orphanages by the Brandenburg authorities. They were attached to the university, and were allowed to set up a printing press, bookstore, apothecary, tailor, shoemaker, blacksmith, and carpenter shops. 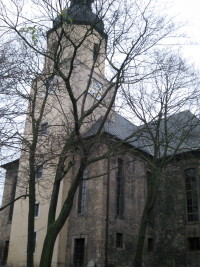 Meanwhile, his labors at the university continued apace. Those that ignorantly scoff at the Pietists as despisers of disciplined study might consider that in Francke’s curriculum, first-year students were expected to read through the OT once and NT twice in the original languages. Subsequent years branched out to the Septuagint, Apocrypha, and Fathers. The outstanding students would continue into Chaldean, Syriac, Arabic and Aramaic.

[<- - - I believe this was Francke's church.] Other pietists were gradually appointed to the university, until it became a vibrant hub of Christian mission, both locally and to the world. Medical clinics were set up. Missionaries went out to Silesia and Russia. Some Swedish prisoners-of-war in Siberia caught the spirit and, after their release, spread the news in Sweden, where similar movements sprang up. Visiting Halle today

In view of the exciting history of the town, which could almost be seen (after Geneva) as a workshop in post-millennialism, I was anxious to visit it during my December 2006 trip to East Germany. I had a pre-paid reservation that night in Leipzig, as well as a ticket to the opera, so that gave my meanderings in Halle an unnecessary urgency, unfortunately: for the Leipzig opera was so unbearable, I ended up leaving after the first act anyway.

Too bad, because Halle is very nice.

(Perhaps a word of explanation is called for on my use of the term “post-millennial.” That is anachronistic, of course. I like Prof. Gawthrop’s term “meliorist.” There is a vision of history and its meaning that is far broader than the future sequence of Christ’s return. Something like Gawthrop’s meliorism may be closer to the category we are searching for.) 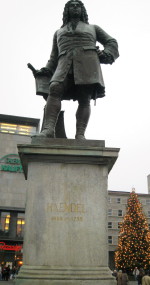 The first thing that struck me in contrast to Köthen was the main square bustling with people of all ages. A large statue of Georg Friedrich Handel looks benignly over the fold â€“ he was born in Halle in 1685, just a couple years after the Plague.

Proceeding to the main church, a choir was practicing, people were milling around and an older woman whom I asked about the whereabouts of the Francke Stiftungen gave that information as well as gushed about how Luther had three times visited this very church. A brisk walk brought me to the church that Francke pastored as well as the still-standing Stiftungen. Unfortunately, my camera ran out of juice before I was able to take very many pictures. As I returned to my rental car, a young mother was looking at it with friendly envy, and chatted about how they hoped to get that very model soon.

Undoubtedly, the atmosphere was the most wholesomely exuberant of any city I visited in eastern Germany. It makes me wonder, is it just my imagination, or is it possible that something still remains stamped by the Pietists 300 years later?

I hope to return to Halle with a more leisurely itinerary, and would recommend a stop for others as well.