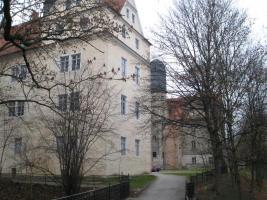 The town of Köthen (sometimes spelled with a C) is southwest of Dessau and due north from Halle. It doesn’t even show up on the Google map until you zoom in pretty far; but as so often with German towns, it turns out to be quite substantial once you get there. (Pix is of the palace complex: it is quite modest, though there is a bit more to it than meets the eye here.)

The founder of German pietism, Johann Arndt, was born near here in 1555. 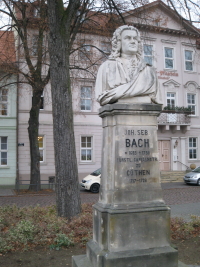 However, most of us will remember Köthen as the penultimate career place of Johann Sebastian Bach. After six years, he moved to Leipzig, where he finished his career. But at the time that he moved to Köthen, he thought it would be the place he would finish out his career.

What is particularly interesting for us in this connection, is that the Prince was Reformed. In the Reformed church (contrary to what is at least implied in certain circles re the Regulative Principle on the continent versus with the Puritans), there were no musical instruments accompanying in the worship service.

Think about that fact in connection with Johann Sebastian Bach being the court musician! 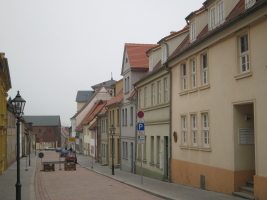 But the Prince loved music, and had surrounded himself with fine musicians. Many had been hired from Brandenburg after the ascendancy of Friedrich Wilhelm I (see earlier discussion of him here). We have to read between the lines a bit, but presumably the lavish court of his father, Friedrich I, had provided for these musicians, while the spartan tastes of the son led to them being dismissed; whereupon they were picked up by Köthen.

The presence of this pool of talent, combined with the possibility of becoming head court musician, enticed Bach to join the ensemble. 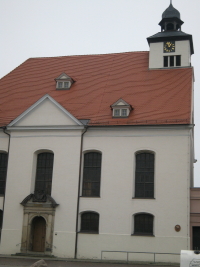 Here, Bach composed some of the great “secular” music, such as the Brandenburg concertos.

Bach himself remained devoutly Lutheran, orthodox but with pietist sympathies. He was allowed to attend St. Agnes Lutheran church in town.

For me, this was the saddest town in my entire tour. The townspeople seemed joyless and grim, even though it was two days before Christmas. There was litter all over, and graffiti. A leering Santa stood in front of a dime-store and played loud, secular Christmas music in English. For me, that single image just says it all. 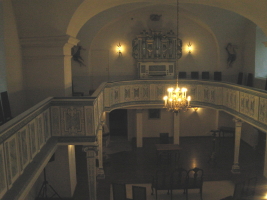 There were two old people manning the Bach exhibition at the palace. I was pressed for time, so I declined to pay the 3 Euro to visit the exhibition rooms; which I now regret, if only to have done the favor for the poor couple. They let me photograph the chapel anyway. The organ was of course added much later.